Boone, North Carolina, November 14, 2019 — When Scott Wynne first saw a myMix unit in use at a Florida church during a holiday church service in December 2012, he immediately saw how myMix would be a useful tool for teaching his students. As the director for the Gilley Recording Studio and Professor of the Music Industry Studies degree with a concentration in Recording and Production at the Mariam Cannon Hayes School of Music at Appalachian State University, many of Wynne’s students who come into his program with a background in performance don’t necessarily have much — if any — recording experience in a commercial studio environment.

After purchasing a myMix unit for the University’s recording facility and testing it out himself, he discovered that not only was the myMix more flexible than standard mixing cue systems he’d been using for instruction — but they also provided WiFi accessibility, built in FX processors, and the ability to label channels and store the information in multiple units simultaneously, ultimately saving time and effort and enabling him to better prepare students for real-world professional recording studio environments after graduation.

“The myMix unit was the perfect opposite of the system that everyone in studio programs usually knows,” Wynne said. “They are way more flexible and help my students, who need to learn that, when they graduate, they will be dealing with a cue system that can be configured in any way they might need. And now, using the myMix, I can test them on some of those more advanced applications.”

Increased Flexibility for Advanced Recording Applications
After purchasing his first myMix in the summer of 2013, Wynne began a longterm upgrade to the University’s Gilley Recording Studio, which houses four control rooms and three live room spaces, as well as a lab.

Now, with five myMix units available for musicians to use, plus two more units with two IEX 16-Ls in each control room, Wynne can operate one of the live rooms with both an A studio session and a B studio session going on at the same time.

“This gives us more flexibility for routing to the different units,” he said. “But we also wanted to have the ability to double check how the students set up their myMix units. So, we put one unit in each of the rooms on one of the shelves so they can double check their own routing is correct before they push it out to the rest of the controllers.

The additional flexibility also made it possible to use one of the myMixes in a unique way: as an FX-send unit that takes advantage of the natural reverberation in a space that students refer to as “the echo chamber” between all the practice rooms.

“It’s sort of a negative space on the fourth floor that nobody designed a functionality for,” Wynne explained. “It’s just concrete, brick and glass, and it has a really nice reverb; so, we use one of the myMix units to send signal out to the speakers there, and then use the myMixes with the microphone preamps to bring the signal back into the console in the control room.”

Features for Additional Ease-of-Use
WiFi accessibility and built-in FX processors were some additional features that convinced Wynne to upgrade Appalachian State University’s studio with myMix, not only because they made it easier for his students to record themselves, but also because they helped save a significant amount of time and effort.

“With WiFi accessibility, we have a myMix unit in the middle of the studio area. And the students can log into it with their laptops and are able to use the WebGUI to change the names for their own unit,” Wynne said. “Or, if somebody is having a problem with the cue system, they can check on it quickly without having to go into the live room.

“There are product lines out there where, once you have a mix set up on the patch bay, you have to go over and tape up the unit and scribble on it to tell the performers what’s on every channel. If you have six or seven of those, you lose about 30 minutes just scribbling down what’s on each channel. The myMix eliminates that problem, and they can get sessions up and running faster.”

The built-in FX processors have also helped Wynne save time in the studio. “A lot of times when you’re getting set up for student recording sessions, the vocalist might want reverb, but the engineer is maybe not at a level yet where they can do that quickly enough so that the session is not impeded. The myMix allowed the vocalist the opportunity to quickly dial in a hall reverb, for example. This lets the musicians hear reverberation in their headphones without actually needing to have that routed up on the console and have signals led back to the headphone sets.”

Click here for a video of the myMixes in use at Appalachian State University. 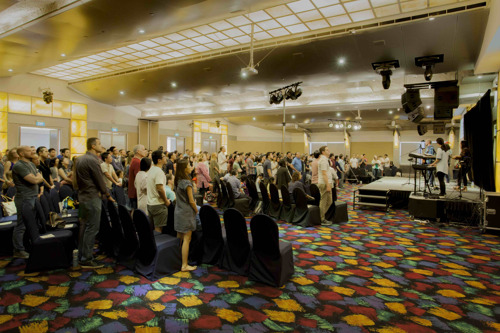 Housed in a hotel ballroom, RHC sets up and breaks down its AV setup every Sunday, leading techs to turn to the mobile myMix to simplify the setup 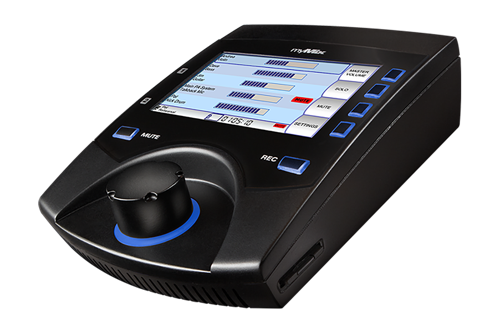 The touring drummer and clinician utilizes the personal recording system for P.A. mix functions during master classes as well as for studio monitoring and to record live gigs